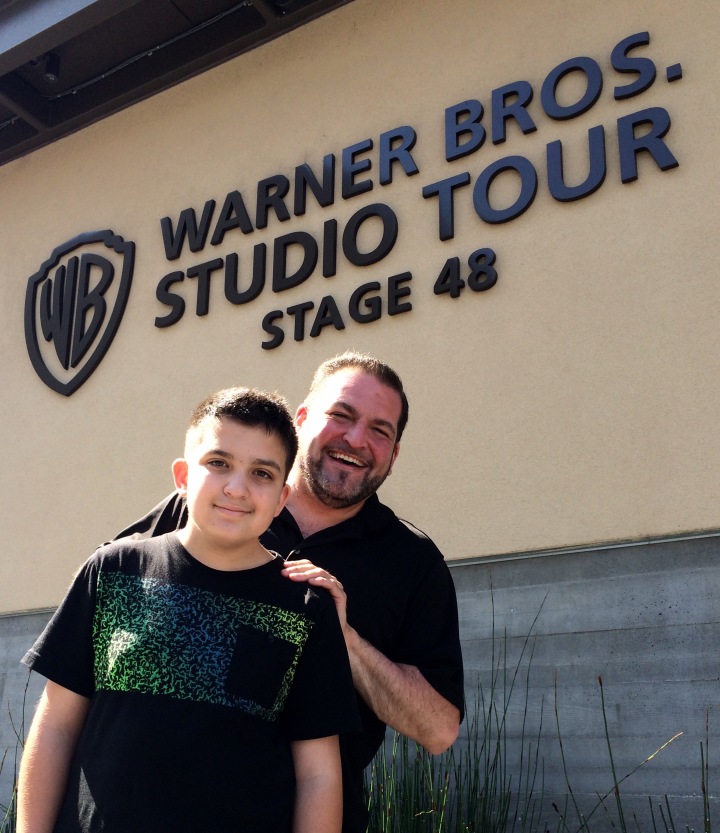 Happy 14th birthday to my sweet and smart son, Jacob! He has overcome many challenges in his short number of years, but he has always been happy and kind to everyone, confronting his issues with grace, determination, and humor. A natural musician he plays piano and saxophone, making the world more melodic and meaningful in the process. It’s challenging for us both with my living so far away, but he is always close by in my heart (along with my younger son, Max). I am so inspired by the person Jacob is and the man he is becoming! 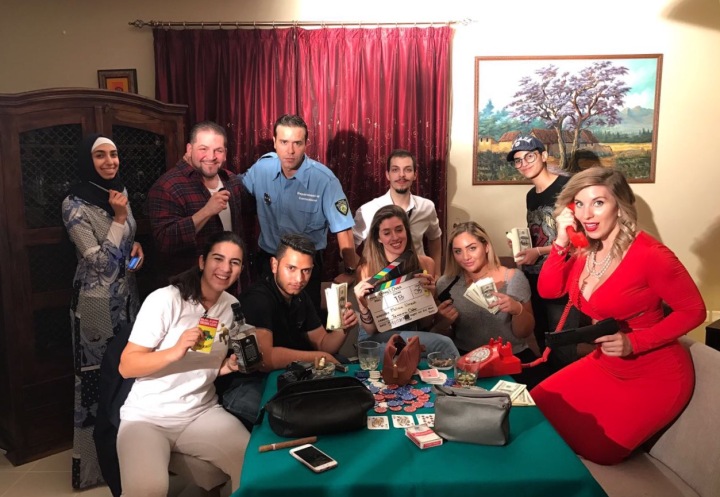 I previously blogged about my adventures as an extra on Star Trek Beyond in 2015, but in July 2017 I beamed up to a starring role as Eric Lopez in “Game’s Over,” a short film by students at SAE Institute Dubai. We shot the film during the evening on July 18 and 19 in Dubai and it premiered at a student showcase at SAE on August 20.

I was invited to participate in this film noir project by Natalie Aji, the film’s producer, Melissa Urresti, the director, via my profile on Mixfame (an online platform connecting talented individuals with production houses, casting directors and producers for projects in UAE and the Middle East).

A description of the film follows:

“Three men are involved in the Los Angeles underground scene. When Eric wants to quit in order to save his family, John and Matthew must figure out a way to make him stay in order to sustain their social status and not expose the crimes they have committed.”

After participating in a student film and two promotional videos at the American University in the Emirates (where I have taught management and marketing courses since 2015) in addition to my past appearances on game shows from 2000 to 2008 I was thrilled to be a part of this project. Acting in this film was challenging, yet rewarding; it pushed me to expand my abilities creatively and professionally. 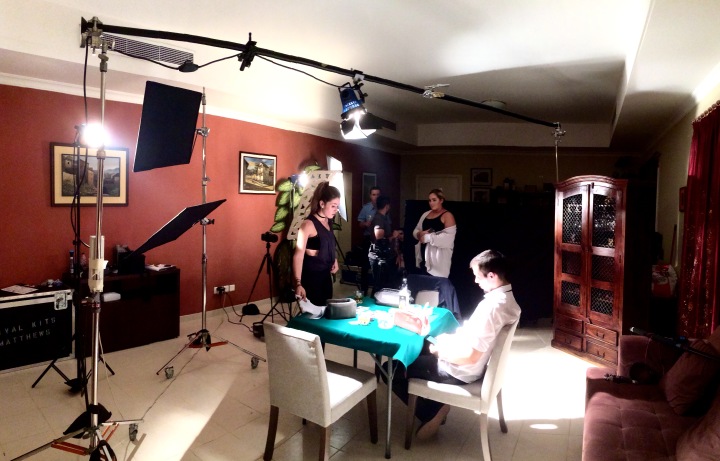 I also appreciated the opportunity to expand my acting experience with such a dramatic role in a project that helped students complete a project for their degree program. I was thoroughly impressed with their dedication and determination. Although it is slightly less than 8 minutes in length, we spent at least 10 hours shooting on location; I am sure at least that many hours were spent editing the final film.

You can watch “Game’s Over” below or view it directly on YouTube.

Bravo to the crew and my fellow cast members for a job well done!

Why did the identical twins cross the road? To tell NSFW jokes at the Improv!

Identical twins Cory and Chad Baumgartner — “The Smash Brothers” — have a unique approach to the business of comedy they’ve used to fuel their careers as comedians. They operate their act under the perfectly named company: Identical Entertainment. Born and raised east of Los Angeles, the brothers had a challenging yet character building childhood:  they attended more than 14 schools! To help make friends they embraced the role of class clowns. It worked!

Those experiences drew them close to each other, strengthening already genetically close ties. They now consider themselves each others best friends. Interestingly, even though they look alike, Cory and Chad are very different: Cory is the “Good Twin” with a laid back style and calm demeanor (he  doesn’t drink or party). Chad is the “Evil Twin,”a bad boy type, who, with his wild party stories, always keeps Cory on his toes.

Their lives are intertwined at almost every level:  they have switched college classes, broken up with each others girlfriends, showed up to work for each other, and even used each others drivers licenses (allegedly). You really never know what to expect with these two: although they are identical twins, their act is one of a kind!

I first encountered the brothers after I praised the Hollywood Improv on how effectively they leveraged their Facebook page. I added that, whenever I teach public speaking courses, I always discuss the impressive public speaking skills of successful comedians. Shortly thereafter I received a message from Cory and Chad offering to come speak to a class of mine. 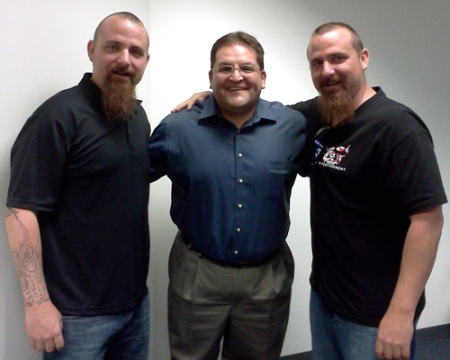 A public speaking class I teach at National University — COM103, Public Speaking — was a perfect fit. On Saturday, June 4, 2011, they spent nearly 2 hours (with their colleague Mark Gonzalez).  They enthusiastically shared their experiences as comedians with my students. Cory and Chad also provided my students with inspiring and insightful ideas about pursuing their passions. It was a sincere and soft-spoken experience (especially considering how energetic their stage act is).

On Friday, March 30, 2012 everything came full circle: I attended their show at the Hollywood Improv. This was my first time attending their show; it was as wild and whimsical as I imagined! After the show, they spent time with me, sharing insights into their entrepreneurial experiences and efforts as independent comedians. They discussed how, in addition to social media, they continue to use traditional marketing tools (something I stress in my classes). They also mentioned that the marketing tricks they use can translate to any small businesses or entrepreneurial effort.

You can watch the interview in the video below. Note: This video contains some mild profanity (Cory and Chad speak from their hearts). As a result, you might want to avoid watching this at work or in mixed company (or wear headphones). But, I assure you, the insights Cory and Chad share are invaluable.

Here are the top 10 tips from the interview:

1. Accept the Benefits of Bombing: accept that bombing on stage is a good thing; it will light the fire under you to do better next time and improve your act.

2. Be Patient, but Persistent: Comedy is a tough business; it takes years to “get paid” and finally realize results from your efforts.

3. Dedicate Yourself to Your Dream: work for the recognition of your writing and the reward of making your audience laugh; you’re going to hear “no” a lot so anchor yourself to your idea and let that motivate you through the tough times.

4. Embrace Word of Mouth Marketing: Cory and Chad worked every audience after each show, handing out flyers and building relationships with their audience.

5. Invest in Marketing Yourself: the brothers paid people to place 5,000 flyers on cars at concerts or other events. Their expectation was a modest 5 people from each effort; they were willing to invest the money on the exponential potential of getting their name out their and leveraging their brand awareness.

6. Make Your Money on the Road: Building your brand in comedy is not something you can do casually or comfortably; you need to hit the road and tour comedy clubs across the country — around the world if possible too!

7. Maximize Every Moment: the brothers got their break while joking in line at a Starbucks; a club promoter was also in line and thought they were funny. Cory and Chad said they were stand-up comedians and he gave them 5 minutes on stage at the Improv that night!

8. Promote Yourself and Believe in Your Potential: don’t expect a comedy club to promote you; take responsibility for your own marketing and put your heart into it.

9. Put the Effort in You Want to See Returned: show business is just that — a business; to build an empire you need to keep building your brand, work hard, and keep improving your comedic craft.

10. Use Every Promotional Option Available: Cory and Chad have used Craigslist, e-mail blasts, Facebook, MySpace, radio commercials, Twitter, and even 5″ x 7″ promotional cards they hand out after shows.